Around 2008, Minneapolis held a drinking fountain competition to promote city tap water as part of their TAP MPLS campaign. Funded with money from the Minneapolis percent for the arts program, four beautiful artist-designed fountains were built. (The competition originally sought to build ten fountains, but controversy over the $50,000 price tag per fountain caused the mayor and City Council to pull back.) The fountains are good examples of public-private partnerships: the City paid for them and maintains the water functionality, but the fountains are built on private property adjacent to the public right-of-way, and the building owners agreed to maintain the sculpture components. All of them use standard drinking fountain parts and plumbing inside the sculpture.

I had the opportunity to visit the fountains this past week. Unfortunately, the water was still turned off for the winter (too bad they aren't frost-proof!), but I got to see the fountains and their surroundings in person. I also visited a fifth fountain, designed by an artist whose work was cut in the cut-backs: a private developer eventually built a version of the fountain in a new infill development's sculpture park.

These fountains turned out beautifully. Although they're not all in great locations, this competition and the gorgeous and functional objects it yielded raises the bar on modern drinking fountains and gives other cities something to aspire to.

The Field
Lisa Elias, 2011
2nd and Marquette Avenues between Washington and 11th Streets
"Graceful grasses forged from metal form tree corrals and bike racks along 2nd and Marquette Avenues, and a fountain at 2nd and 9th Street. This fountain’s design is meant to provide a sense of drinking water from a pure and natural source."
(City of Minneapolis New Public Art Works brochure) 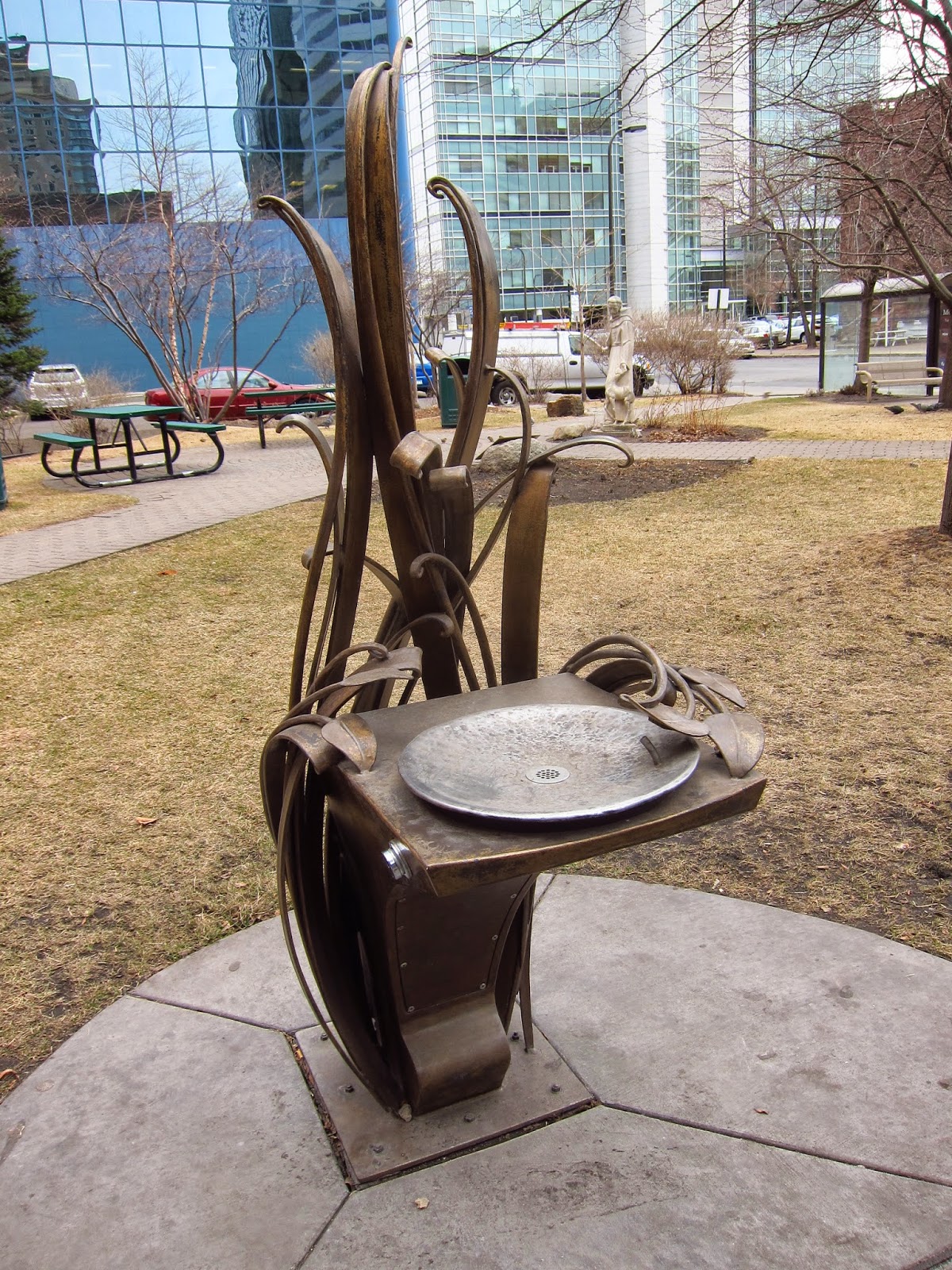 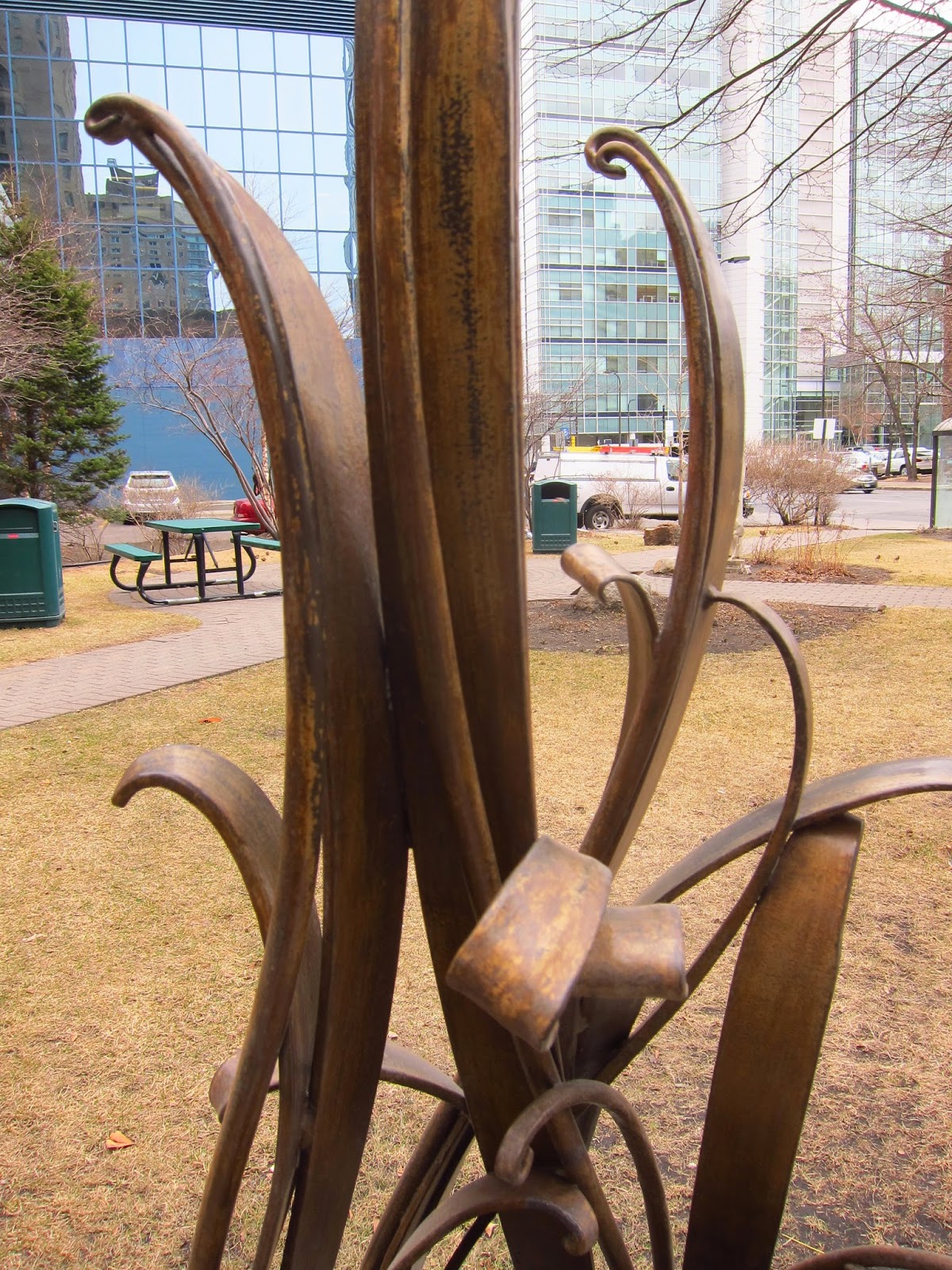 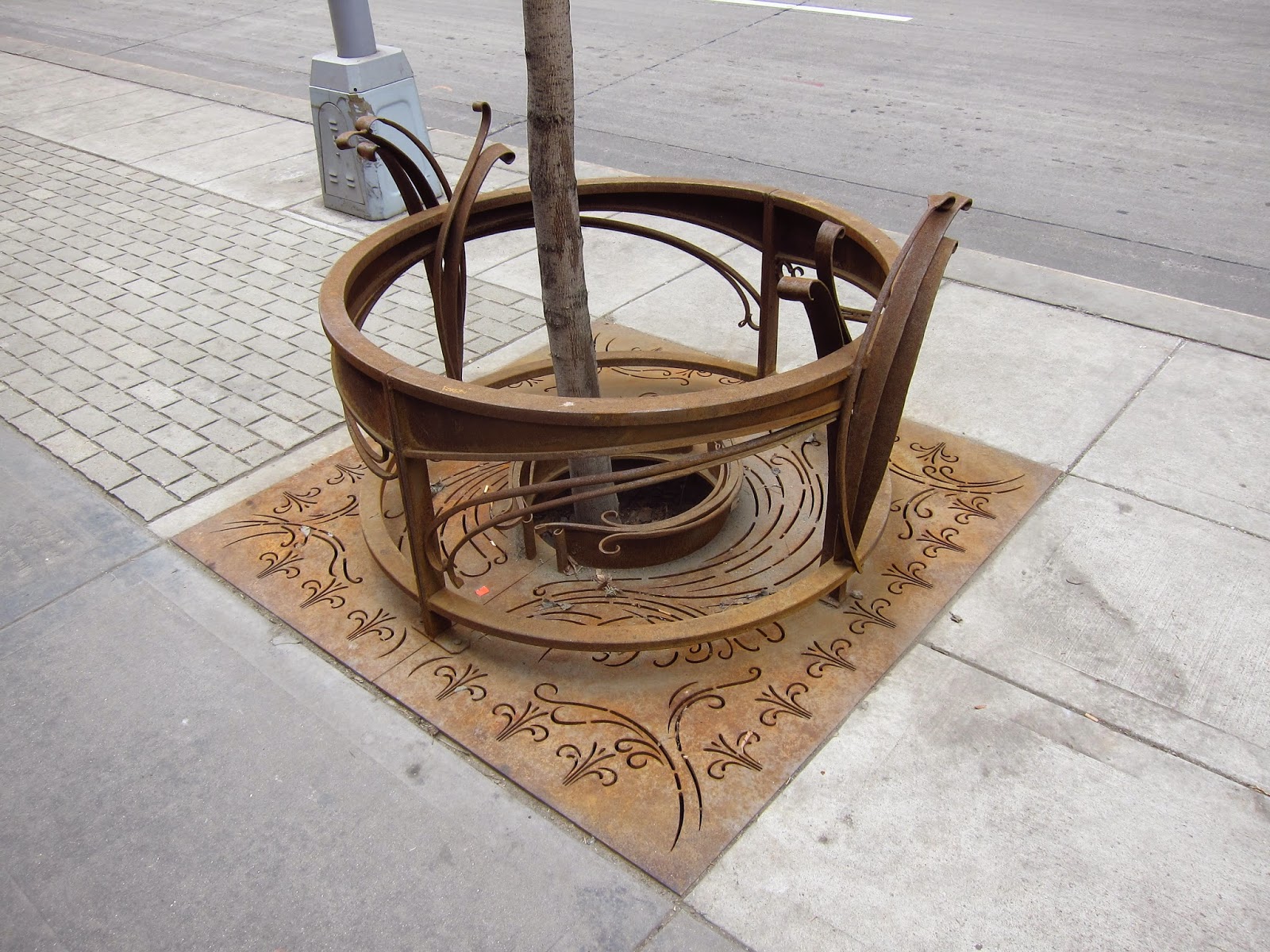 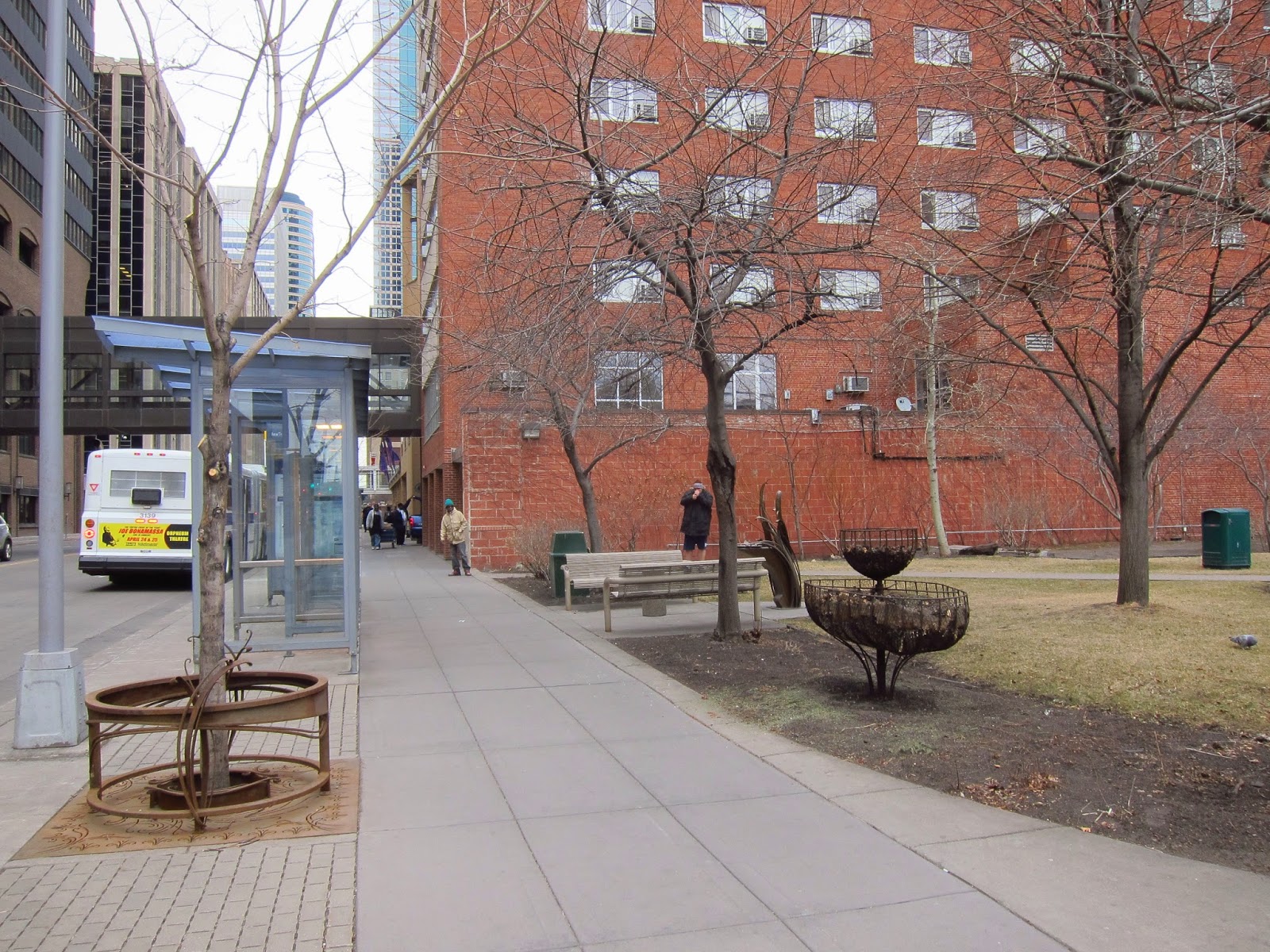 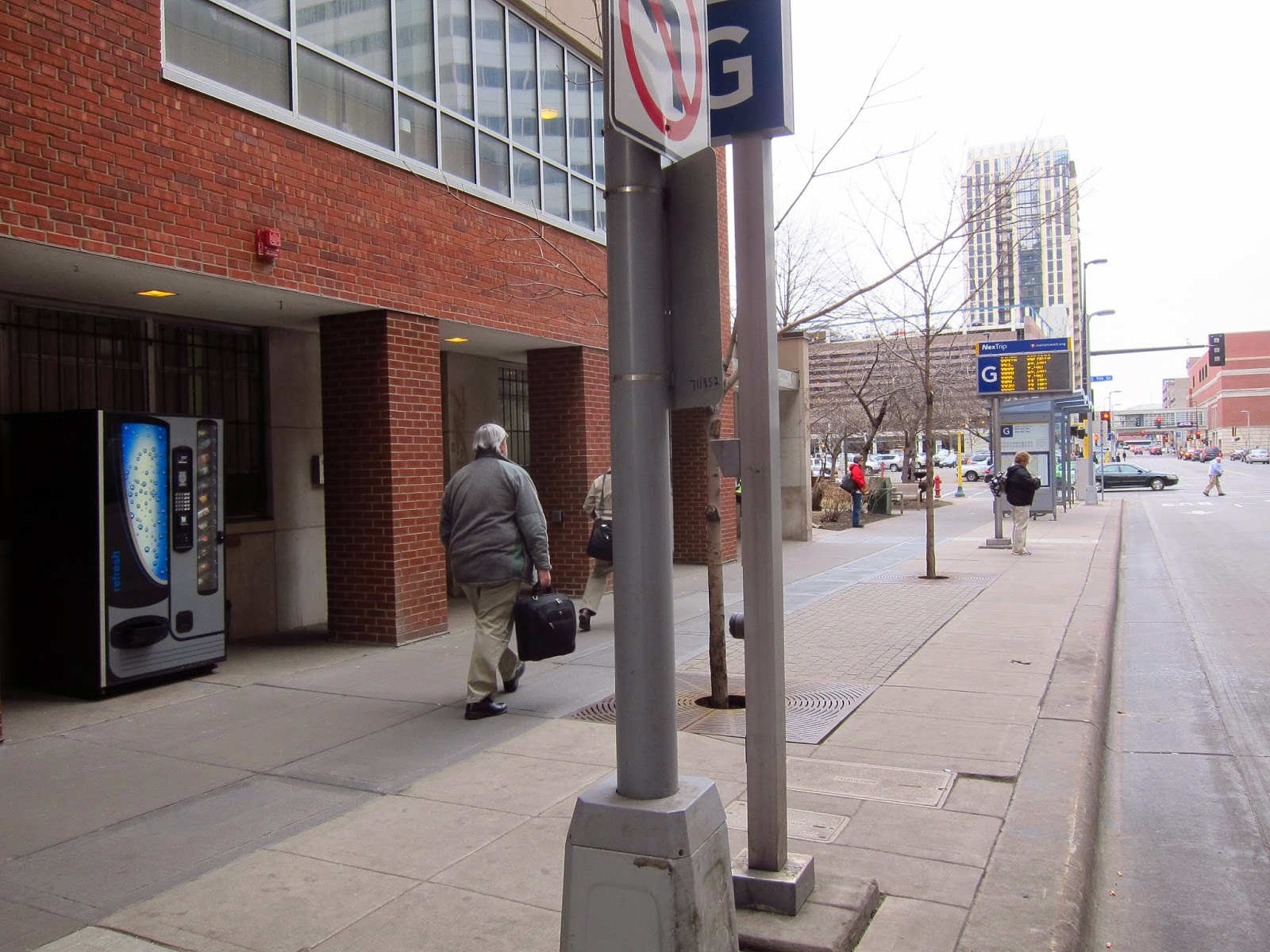 Nearby Coke machine. Hopefully the fountain (just visible in the distance behind the lady in red) is stealing some of its business!

Tilted Bowl Fountain
Seitu Jones, 2011
Third Ave and Main Street, SE
"This fountain suggests a tilted bowl, spilling water onto the earth. Users bow and hold the bowl in a brief ritual honoring the first sources of drinking water, which is near this site and are reflected in the historical map of St. Anthony etched below."
(City of Minneapolis New Public Art Works brochure) 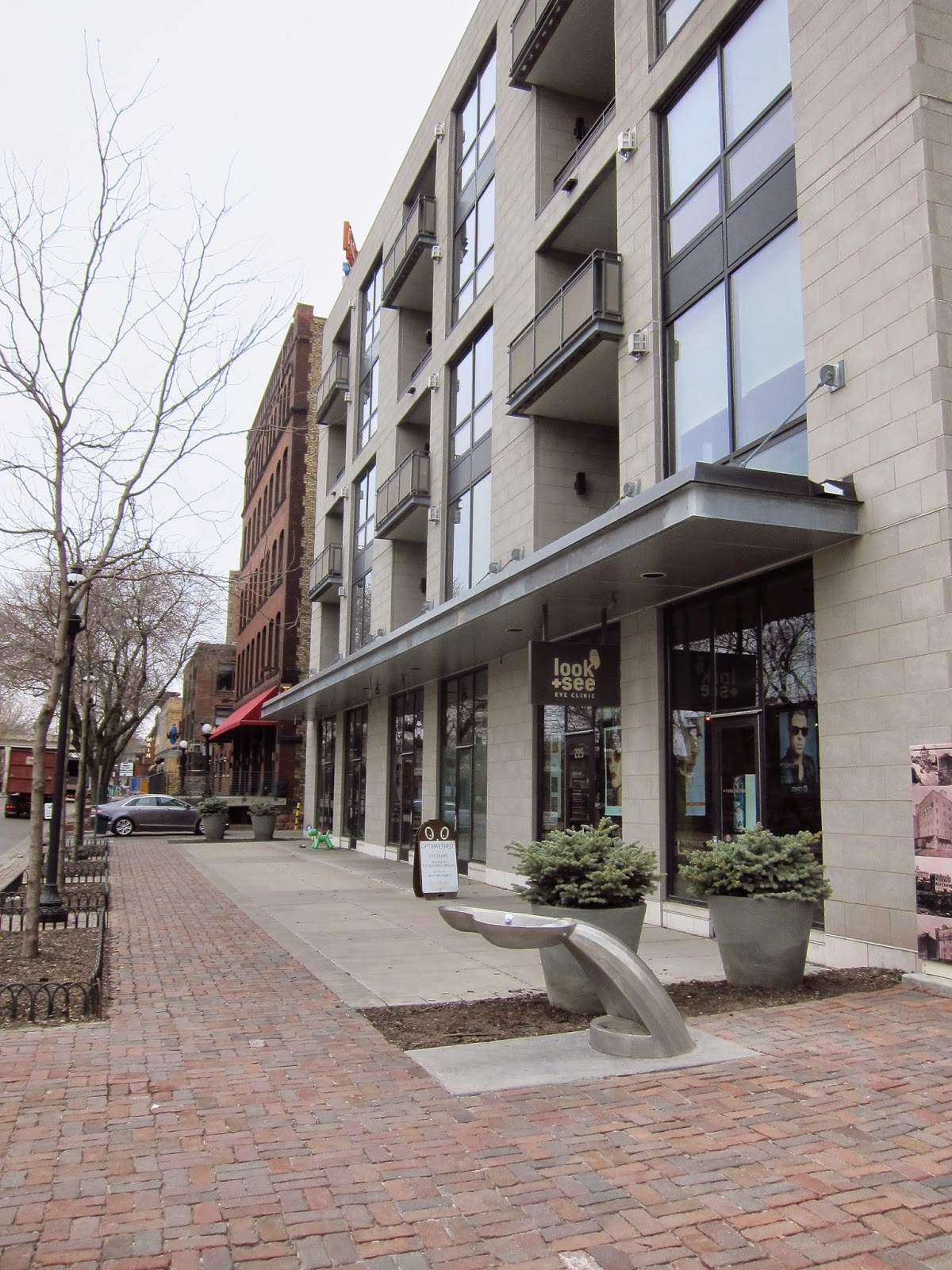 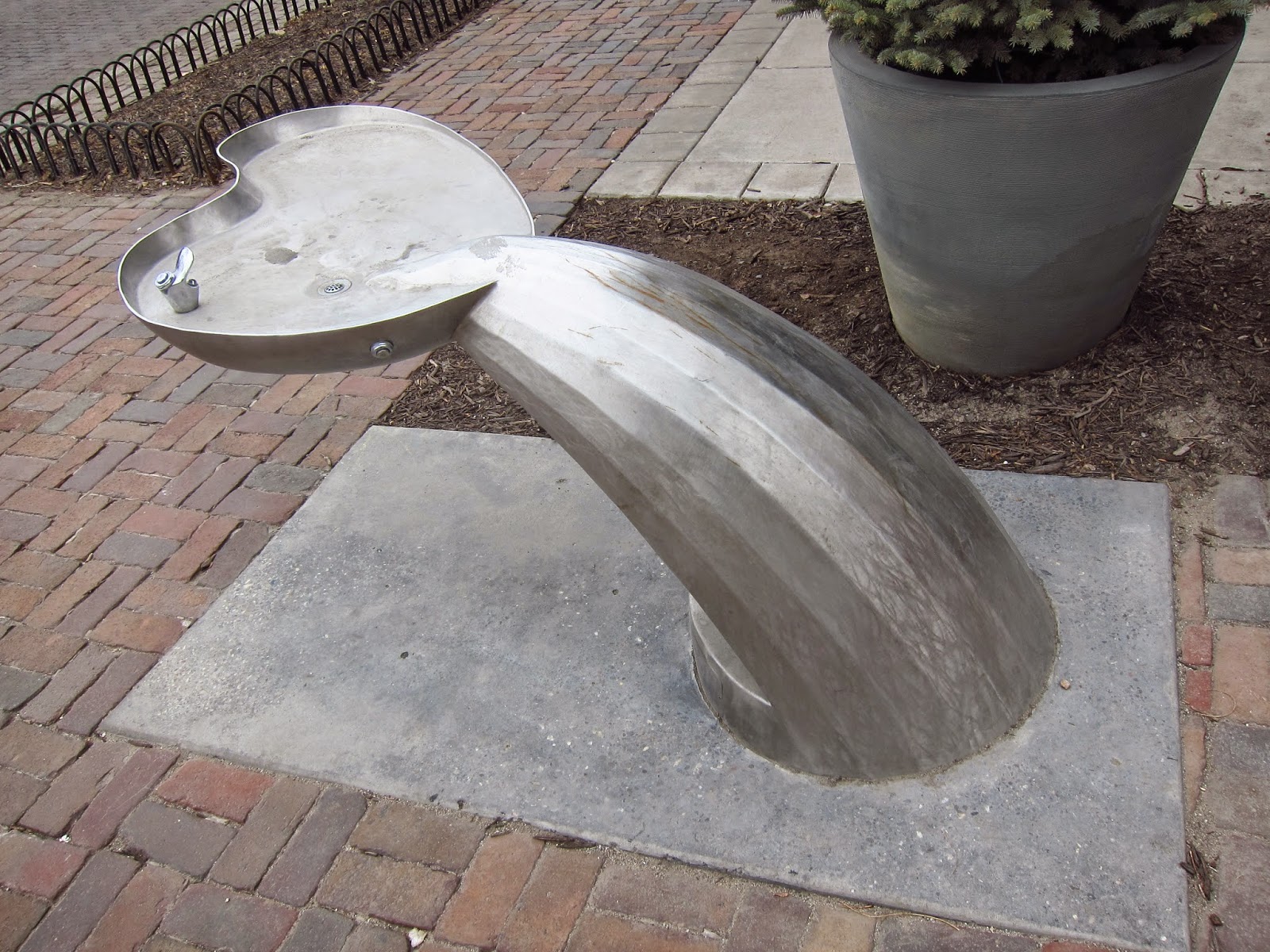 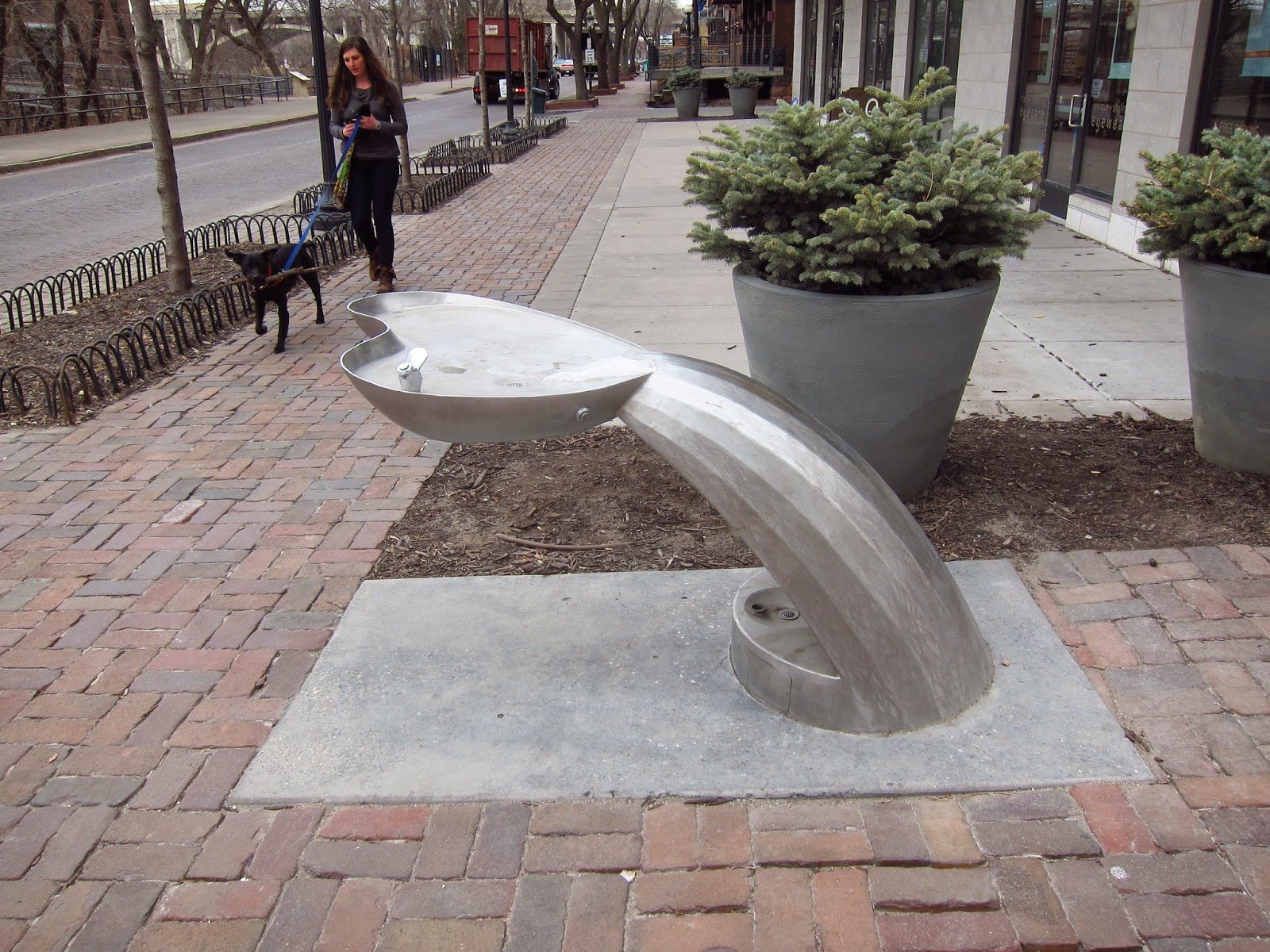 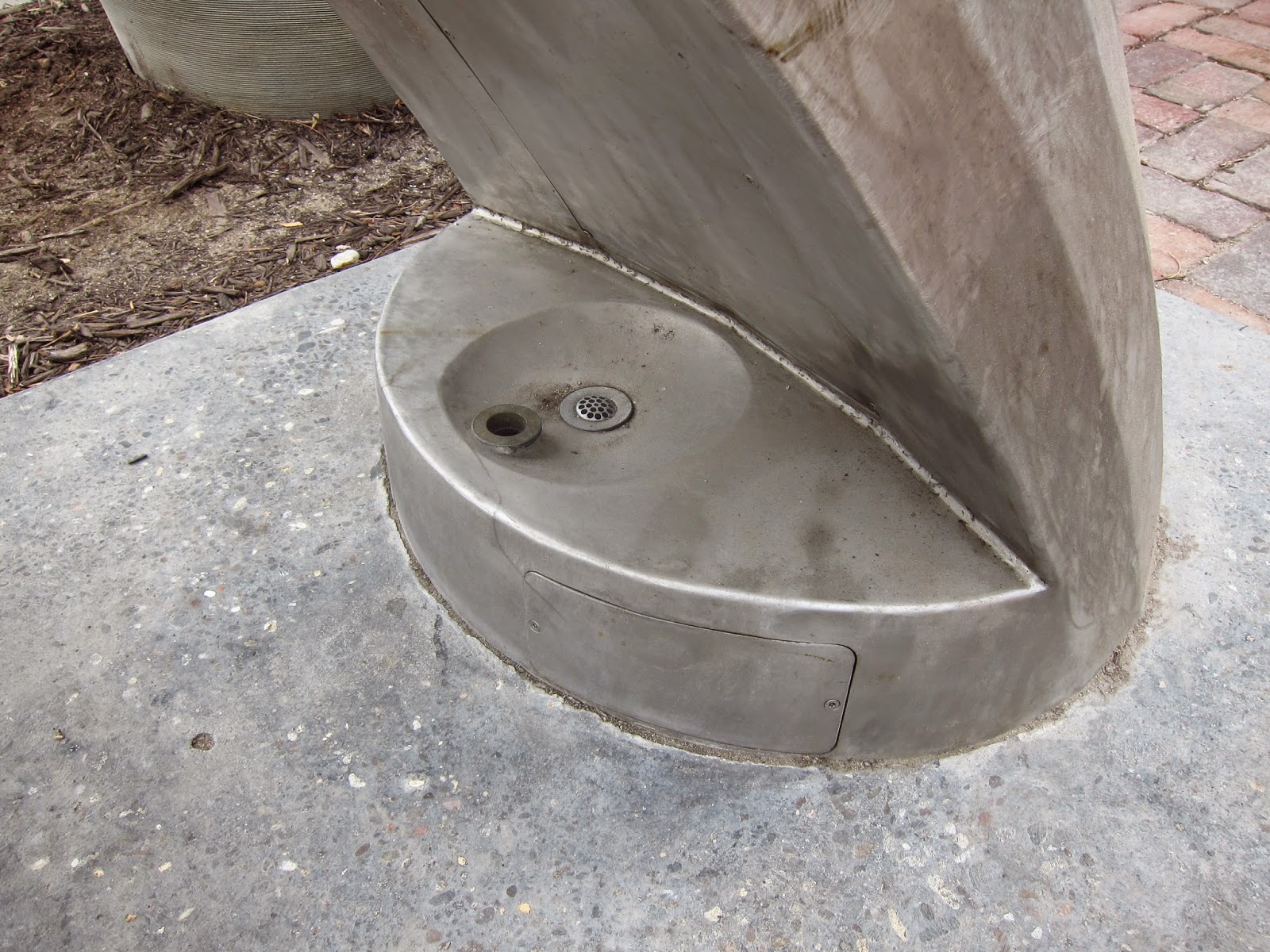 Water of the Dodem Spirits
Peter Morales, 2009
1113 Franklin Avenue E
"Based on the Native and Meso–American idea of Turtle Island, where land emerges from infinite waters upon the back of a turtle, this granite fountain features a stylized fish, a turtle spouting water, and a crow who gazes upon the drinker."
(City of Minneapolis New Public Art Works brochure)

This fountain also features a gorgeous carved round granite button and an unfortunate strip-mall plaza location. 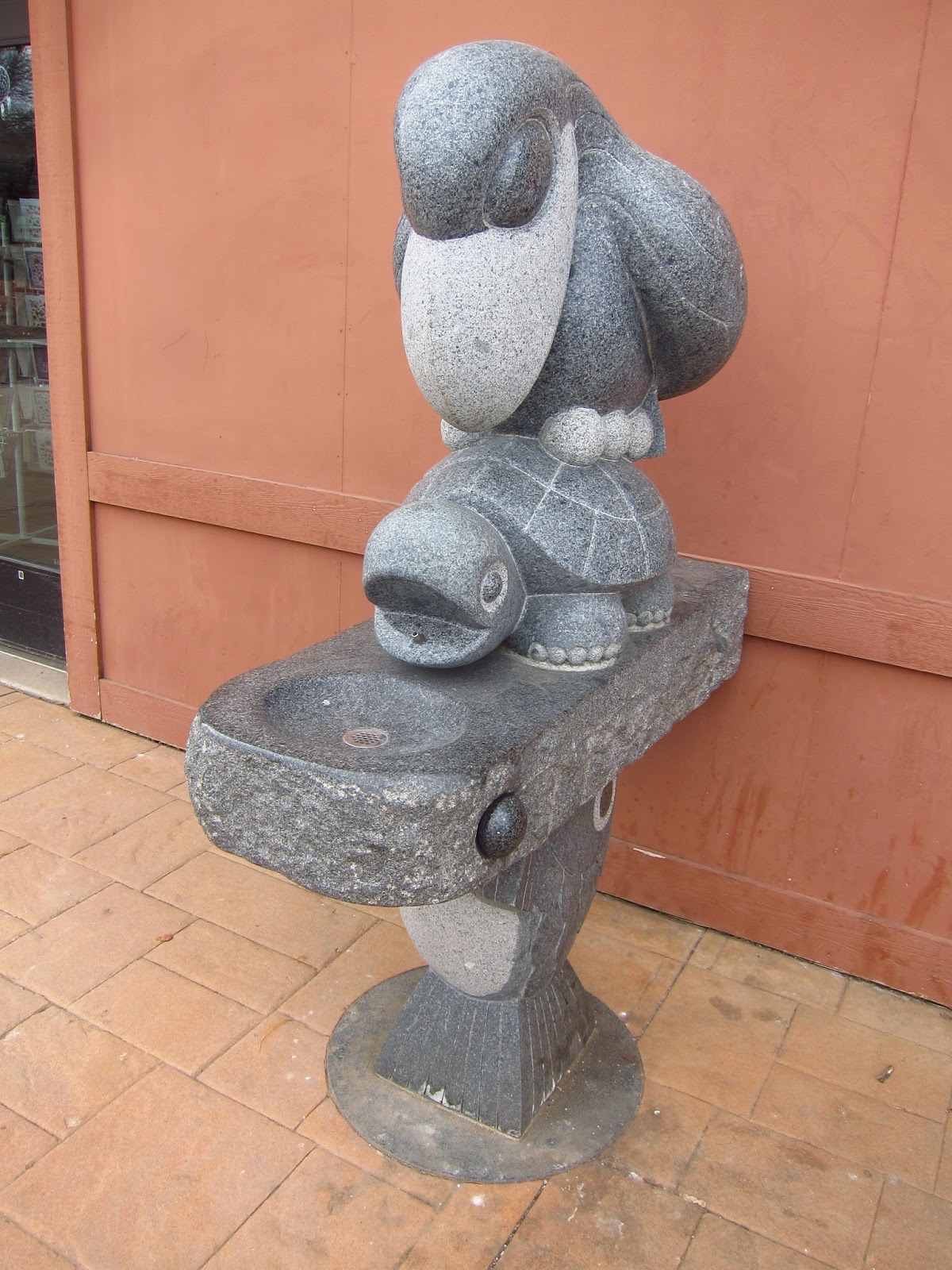 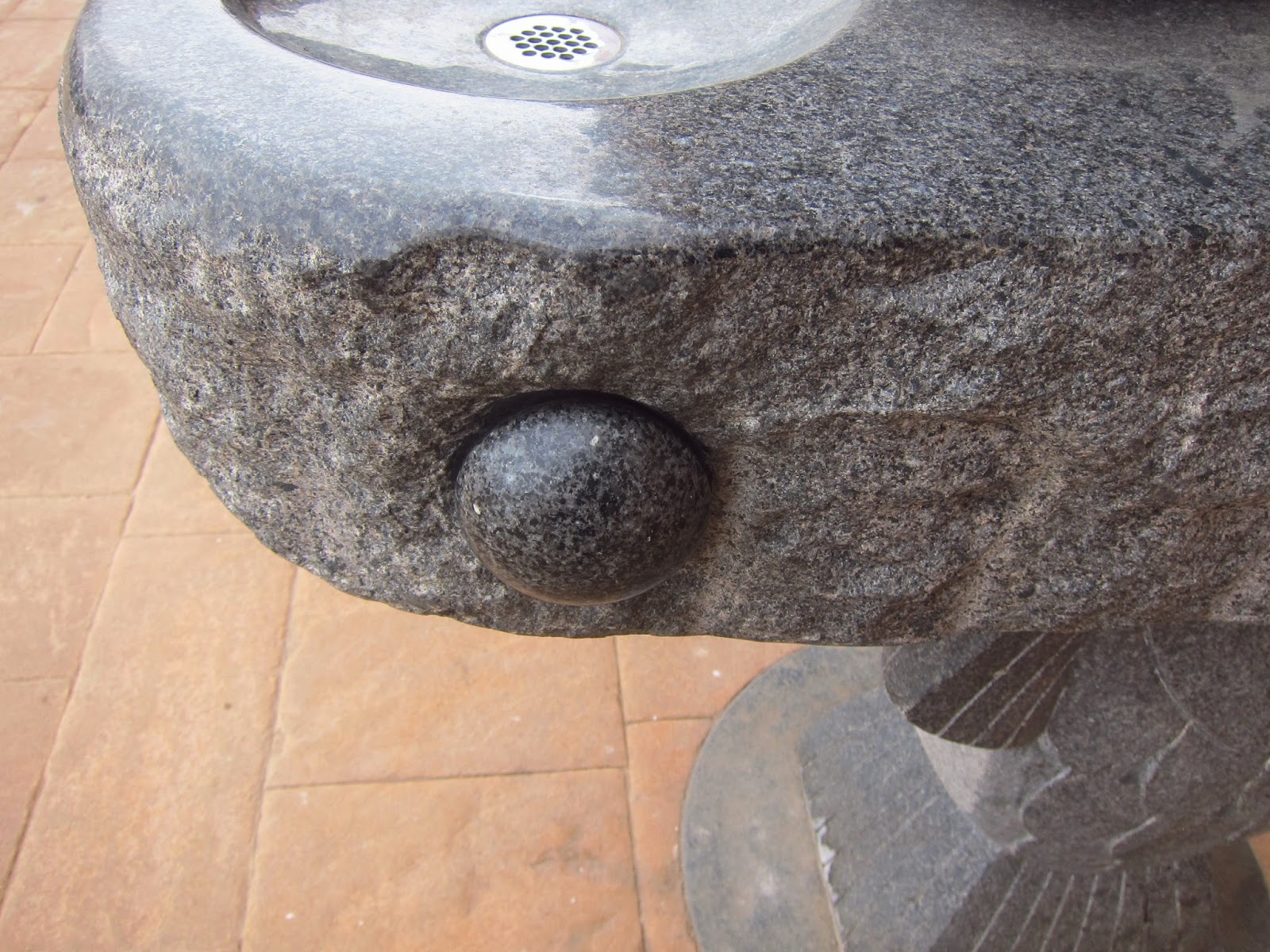 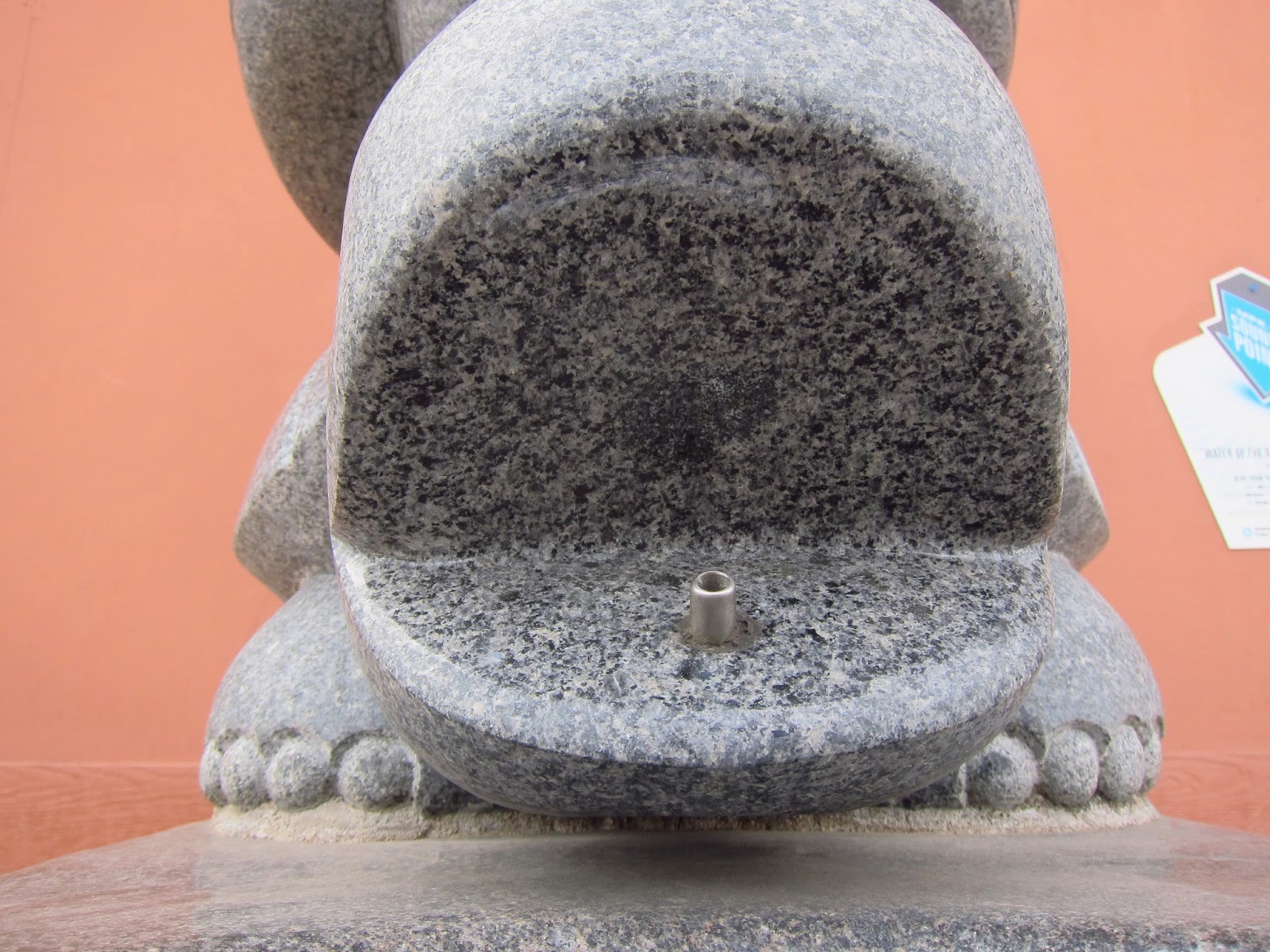 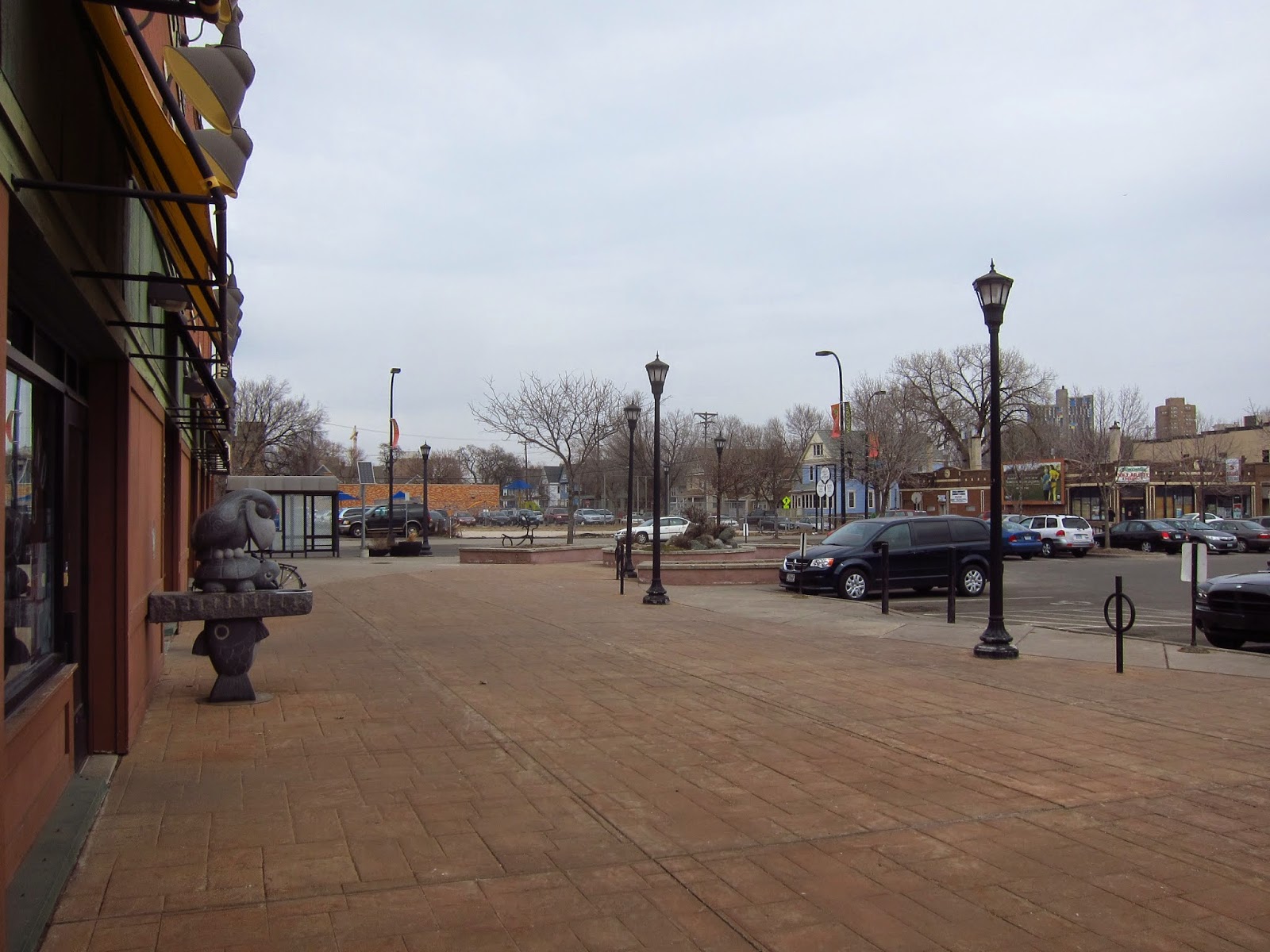 This fountain also features a bench encrusted with student-designed water molecules. It, too, is in an unfortunate location on a huge road. Adjacent to a YMCA and fairly close to a light-rail station, it nonetheless has a fairly bleak context. It's incredibly beautiful, though. 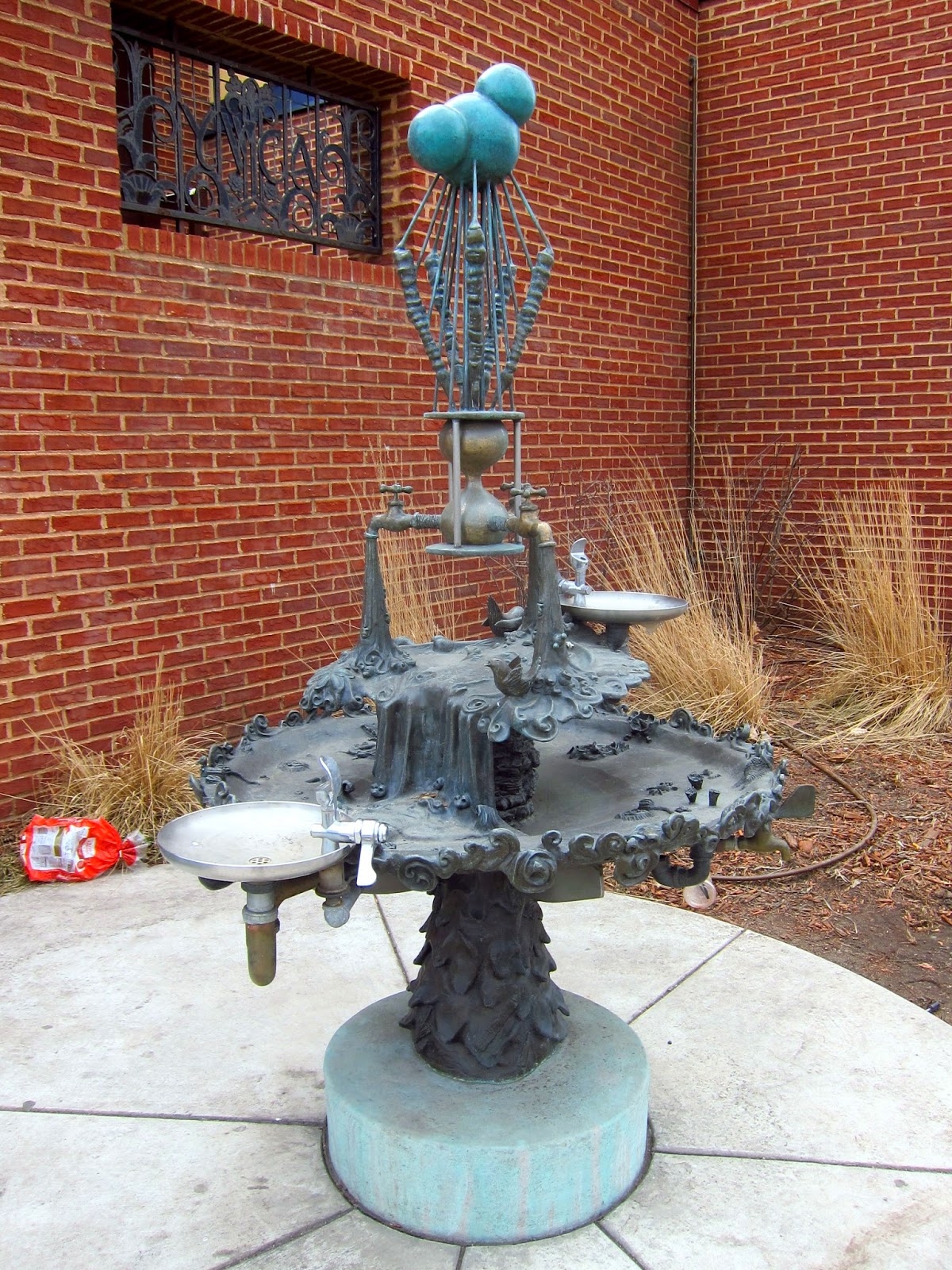 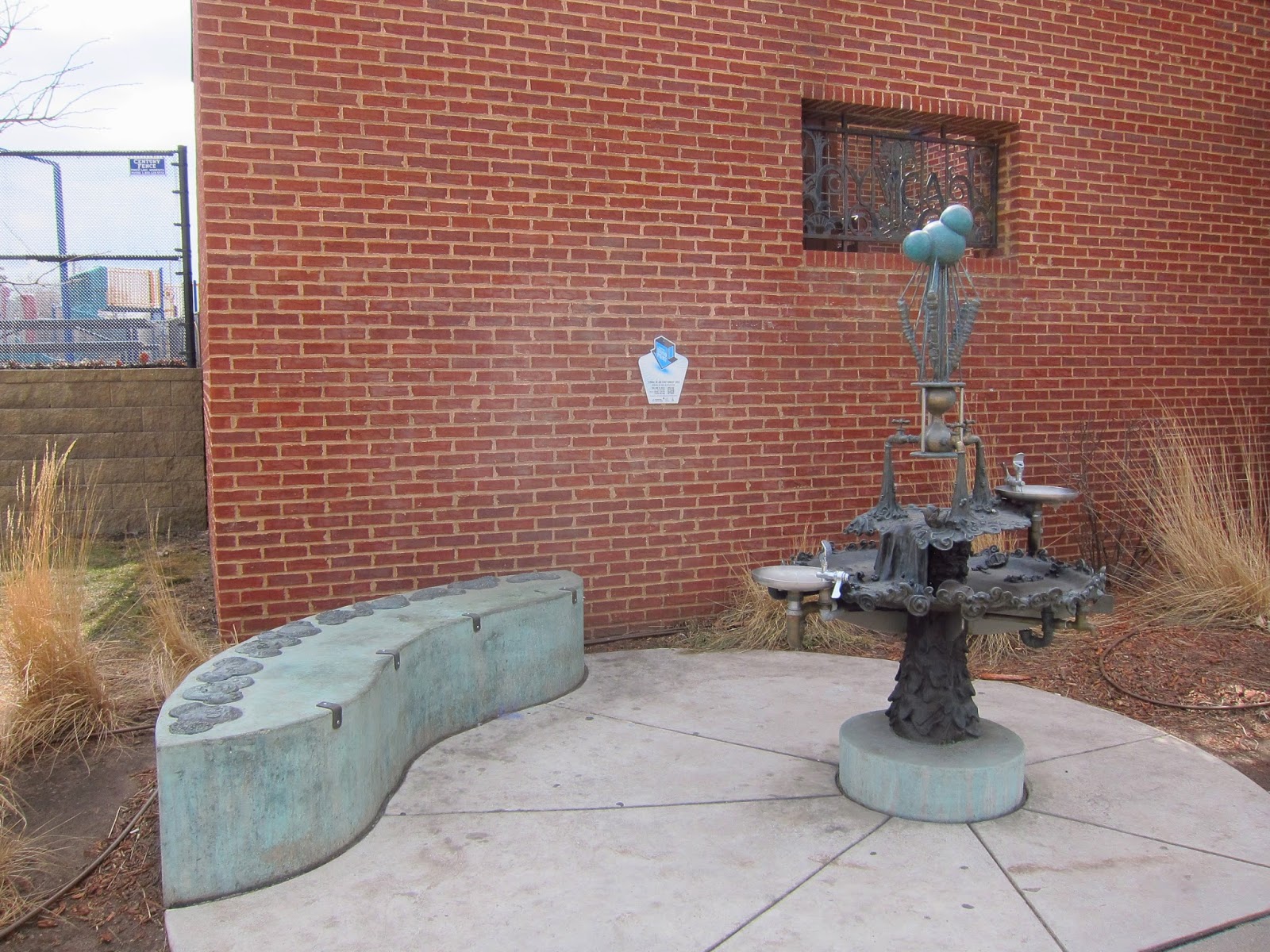 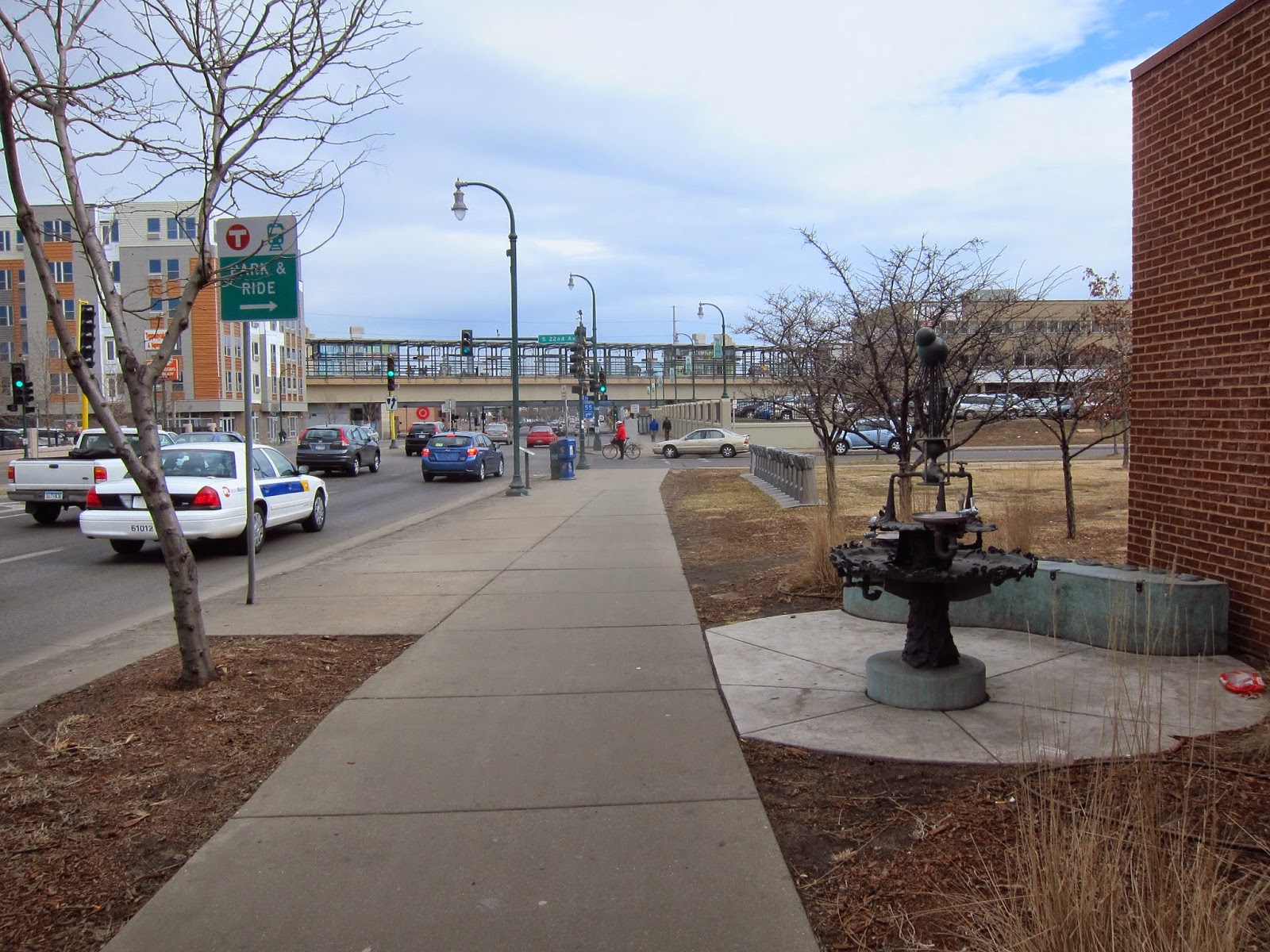 A giant blue arrow in a privately developed artwalk. This fountain has a bottle filler and dog bowl, too, but the drinking fountain itself does not conform to ADA requirements. But maybe my favorite of the five anyway. 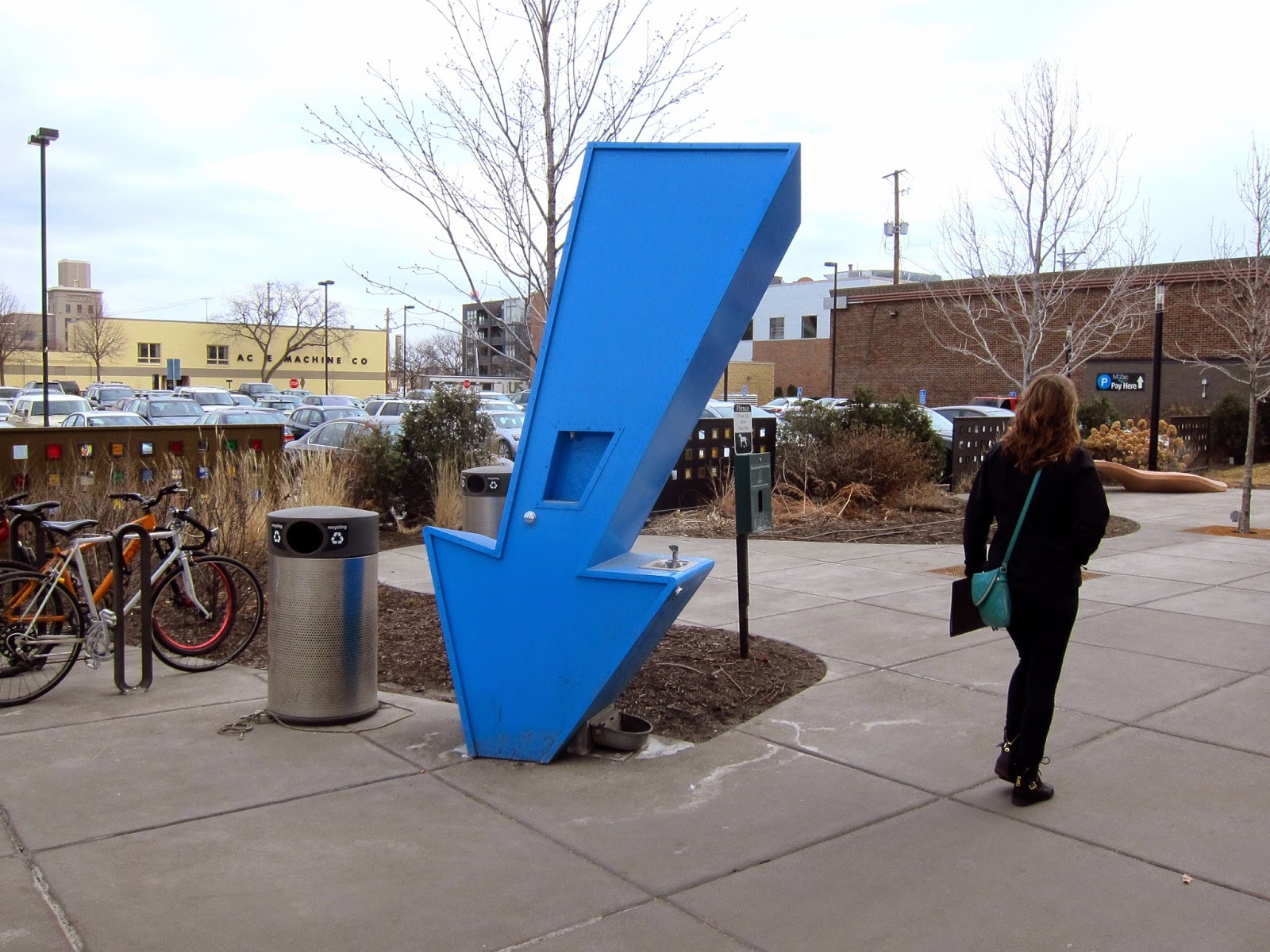 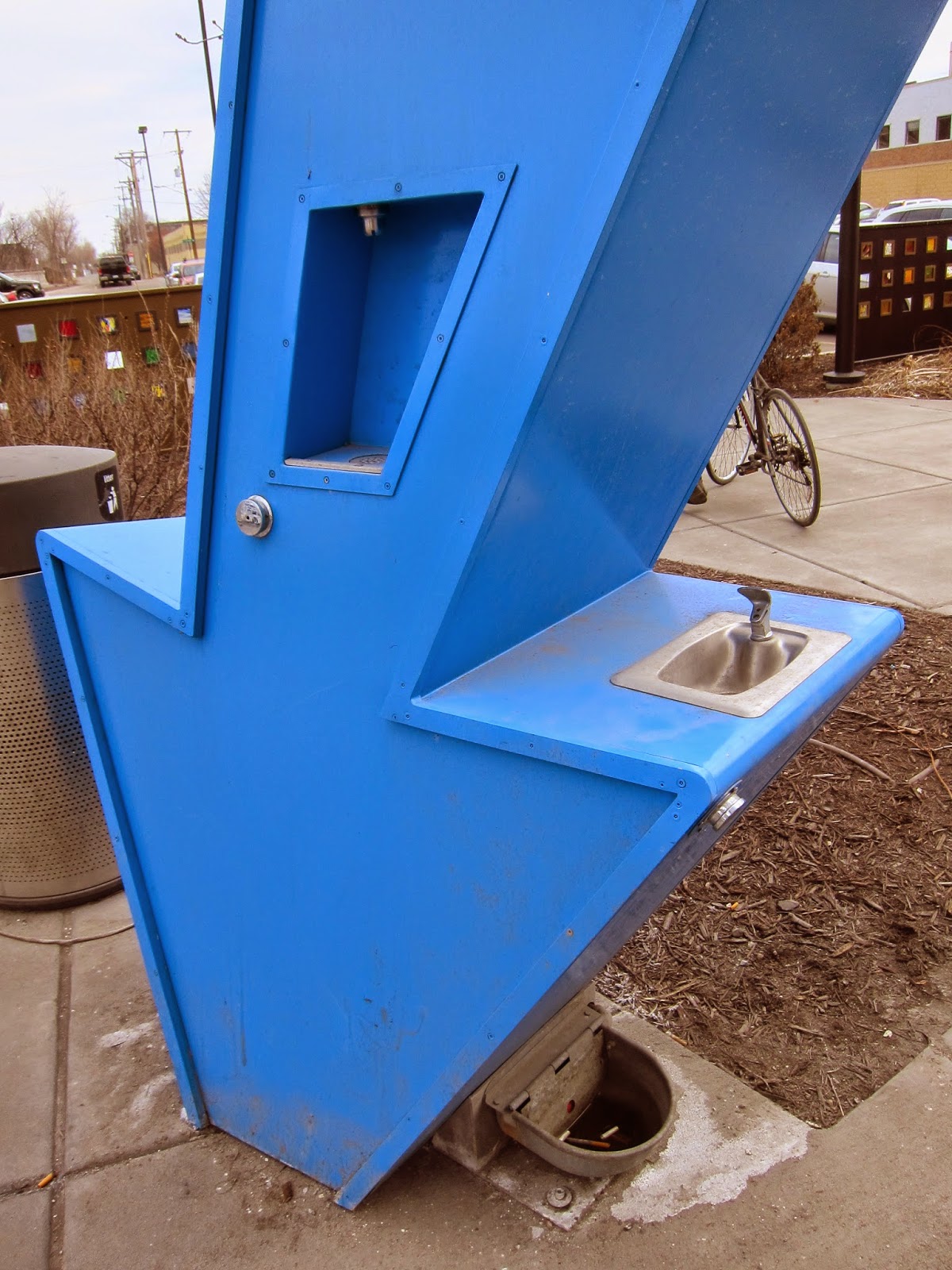 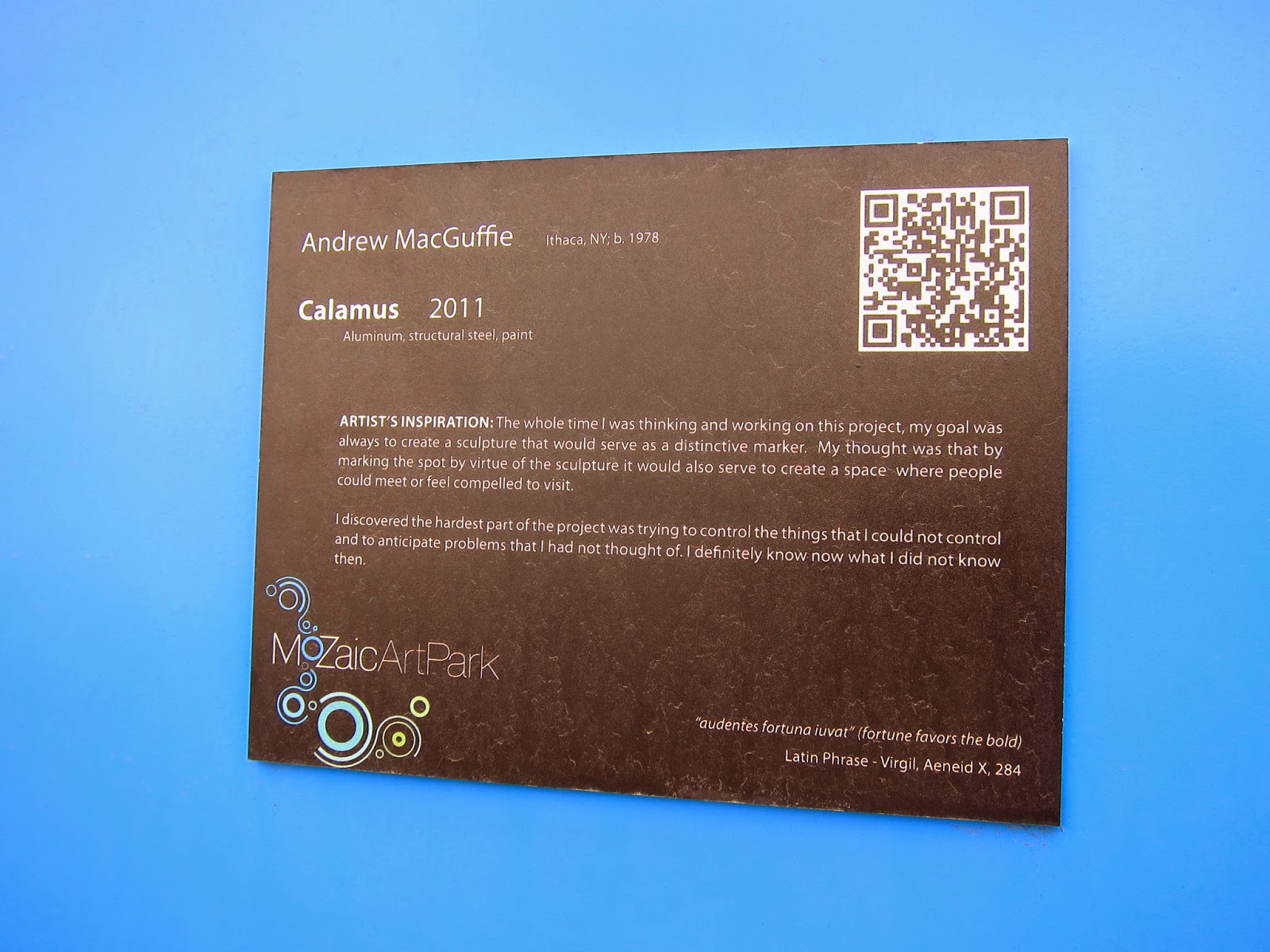 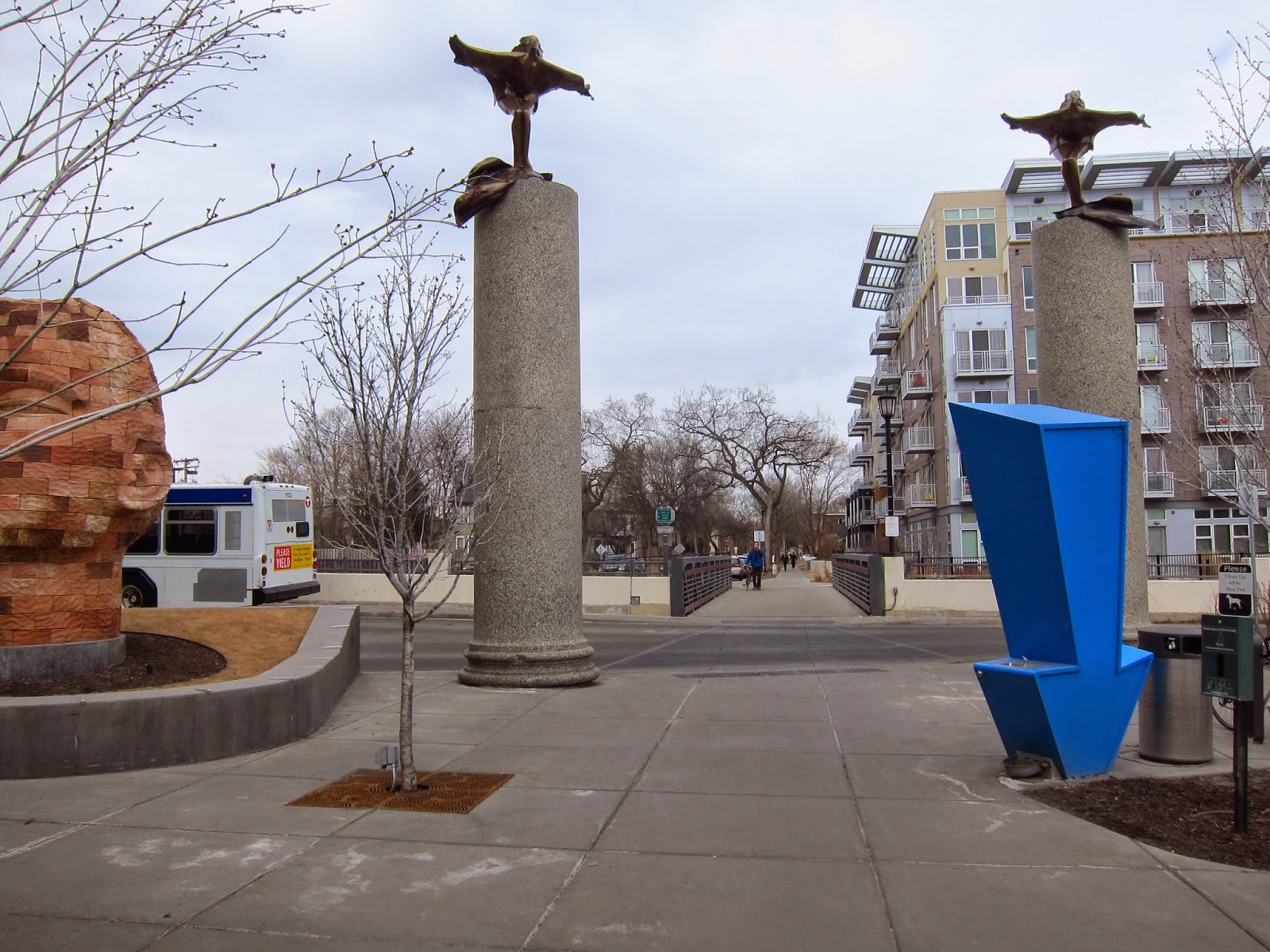 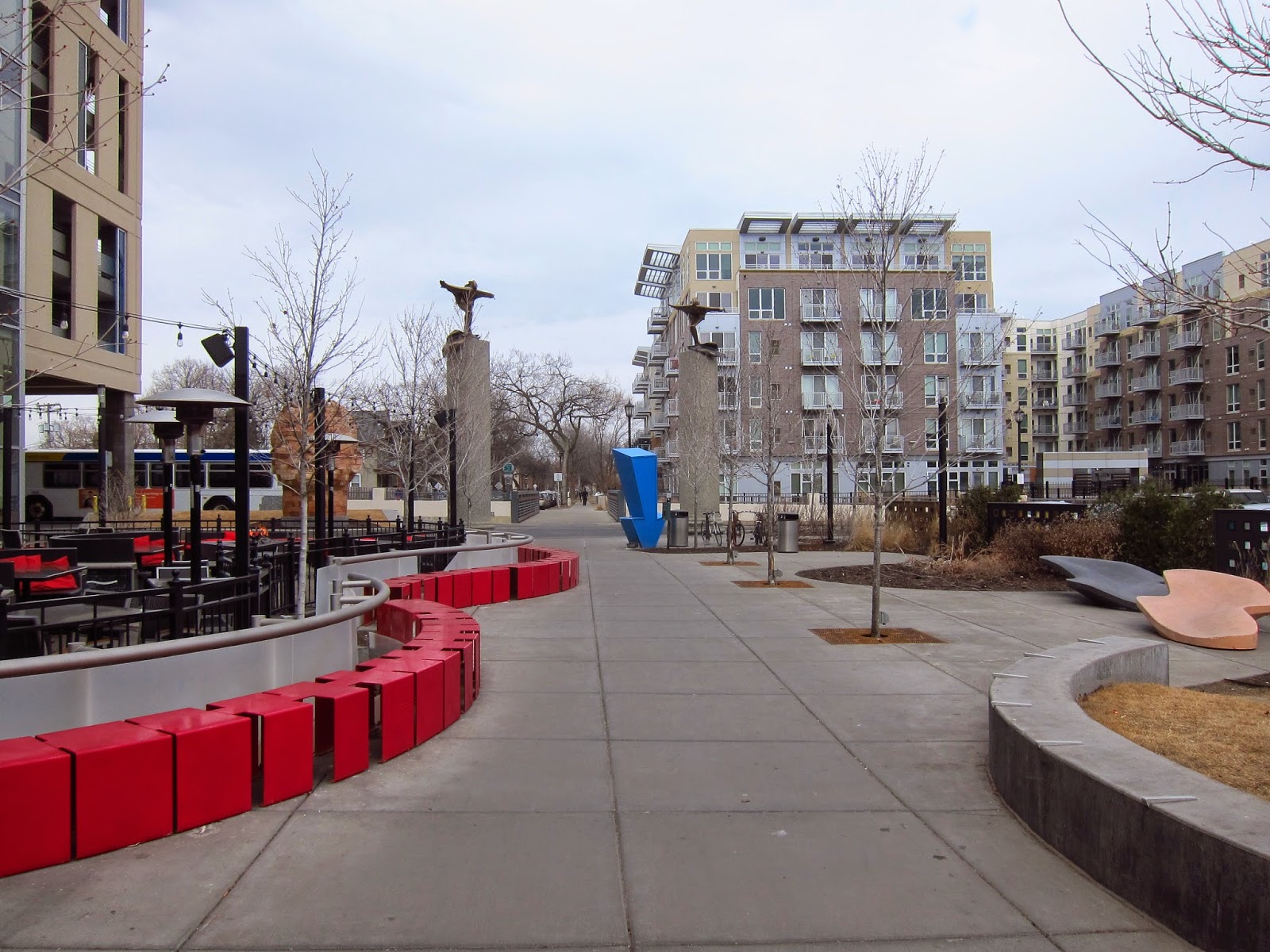 Welcome to the Drinking Fountain Blog!

Drinking fountains are a key indicator of the relationship between people and place. When a city is comfortable, welcoming, and vivacious, the drinking fountains reflect that in their aesthetics, taste, and spirit. This blog is a collection of some of my favorite drinking fountains and my thoughts on the urban implications of these most elementary of human amenities.